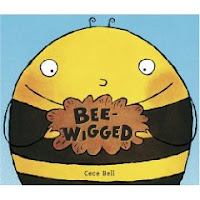 Hi, and welcome to my (sporadic) blog. I have come out of hibernation to talk with Cece Bell, author, illustrator, and friend, and to help her launch her new book, Bee-Wigged (Candlewick Press.) Some of you may know Cece from her other picturebooks, which include Sock Monkey Goes to Hollywood, Sock Monkey Boogie-Woogie, and Sock Monkey Rides Again. Or from her board books, Busy Buddies and Food Friends. If, based on some of these titles alone, you detect a theme of friendship in Cece's work than you're one smart cupcake. Bee-Wigged is no exception. The story is about a giant bee who is feared by everyone. One bright day he finds a wig resting on the sidewalk. He puts it on and voila! Everyone thinks he's a boy. He makes friends everywhere he goes, until one day the wig blows off and Jerry's true self is revealed. When the wig begins to speak (!) Jerry realizes he has made the best friend of all. Plenty of other bloggers will focus on Jerry. Me? I'm going to focus on Wiglet, who has a moral authority I haven't seen since Linus. It's pretty clear he needs a book of his own.

Mad: If I didn't know you and your personal habits before I read this book, I would have said: Cece, WHAT EXACTLY WAS IN THAT ICED TEA? But since I do know you, I'll ask you to tell us about Jerry's wig instead. What can you tell us about the name: Wiglet?

Cece: Believe it or not (and the first time I heard it, I didn’t believe it), “wiglet” is a word in the dictionary. It may be the funniest word in the dictionary, ever, and Webster’s says it means “a small wig used esp. to enhance a hairstyle.” (So we can call the hair extensions favored by Britney and her ilk wiglets, too.) The first time I ever heard the word wiglet was when my friend Kelli Huffman (to whom Bee-Wigged is dedicated) told me that her beloved Nana used a wiglet to, you guessed it, enhance her hairstyle. We were walking at the time that she gave me this information, and I think I came darn well close to wetting my pants from laughing so hard. I was sure she had made up the word. When we returned from our walk, I looked it up in the dictionary, and there it was. So anyway, I knew I had to have a wig character in a book, just so I could use the word wiglet.

Mad: Is it true that you have the original wiglet?
Cece: Kelli did give me Nana’s original wiglet. Kelli had taken the wiglet and sewed it to the top of a bill-less baseball cap, so that her pre-school students could wear it when they played dress-up. The wiglet looks horrible, but Kelli tells me that back in its glory days, she got to comb and style it for Nana before Nana wore it to various glamorous events in DC.

Cece: Guinea pigs are good and hairy, and also kind of blobby, which was just right for the shape I had in mind for Jerry Bee to wear on his head. Also, a guinea pig’s hands and feet and ears are tiny and could presumably be hidden under all that fur.

Mad: What other animals did you consider?

Cece: I think I considered a dog for a long time, but decided that it would be too hard to hide a dog’s dogginess, especially its longer legs and distinctive ears.

Mad: Have you ever worn a wig?

Mad: What was the occasion?

Cece: I am compelled to put a on a wig anytime I am close to one.

Mad: Did you/do you feel like a different person?

Mad: When I think of Big Wigs, I tend to think of Jan Brady, although she used her wig to be DIFFERENT from everyone else. Jerry uses his to help him conform. Can you think of other Big Wigs in literature? And since I thought of Jan Brady first, I'll extend that question to include film or TV.

Cece: That big wig of Jan’s may be one of the all-time great moments in television. I’m having trouble visualizing anything right now other than that beautiful big black wig, so I think I’ll have to pass on this question. Let’s just say I’m pretty unschooled in the Big Wig Motifs of Great Literature.

Mad: So, wigs: Conformity or distinction?

Cece: I’d say distinction, no matter what. You just can’t miss a wig.

Mad: You've mentioned before that when you were growing up and The Only Kid in the Class With a Hearing Aid, you were worried about fitting in. That's on top of the normal fitting-in worry that you already had just by virtue of being a kid. What's the craziest thing you ever did to try to fit in when you were young?

Cece: Do you remember those purses that were popular in the early 80’s? They had these curved wooden handles and were kind of clam-shaped. They had all these different covers that you could get to match your outfit. The finest girls in school all carried them, and if you were super-fine, you got yours monogrammed. Well, I convinced myself that a purse of this nature

would open up a whole new world of popularity and pizazz. The problem was that carrying anything not 100% essential was, and still is, totally anathema to the Cece Bell way of life. Not only did I feel ridiculous carrying extra stuff that I didn’t need, I am sure I looked ridiculous with a tiny purse that didn’t ever match my ill-fitting clothes. I think that purse lasted all of one week. Total garbage! Thank goodness I didn’t get into the whole add-a-bead disaster.

Note from your hostess, who did get into the whole add-a-bead disaster, though she never got past one bead: Bermuda Bags!


Mad: You once told me that you thought people were nicer than they were because -- being hard of hearing -- you couldn't overhear any nasty asides they might have made. How do you think that transfers into your work? And I have to add: I find it interesting when you draw/paint, especially in the Sock Monkey books, you have everyone saying something at once in a crowded room! Could you take that sorry approximation of a question and just run with it?

Cece: Well, “missing out” on things that are said has probably affected my life and work in two ways. The first is that I do tend to see the world through rose-colored glasses, and think that people are essentially good -- I never hear them say anything bad, so why not? This is, I know, not always true, but heck, whatever works. It probably keeps my writing and my illustrating very positive, which usually works well in the children’s lit field. The second is that “missing out” probably made me more creative. For example, I watched a LOT of television as a kid -- and that would’ve been before there was closed-captioning. Why I would do something so idiotic is beyond me, but what I ended up doing was kind of fun: I would make up stories in my head to go with the pictures I was seeing. I had lots of crazy stories about Horseshack and Mr Kotter, Bugs and Daffy. Seriously weird stuff. Closed-captioning came along when I was 12 or so, and my creative skills probably plummeted.


Mad: When I read the first draft of Bee-Wigged, I thought: I love this! But I didn't think that Candlewick would publish it because a talking wig might be outside of their comfort level. (I tend to think cozy when I think Candlewick's picture books. Not that this isn't a cozy story, but you know what I'm saying.) Did you have any trouble convincing them or did they snag it right away?

Cece: They snagged it right away. I’ve never seen anything like it. I sent in a dummy version; two weeks later to the day, they bought it. Nuts! Would that they were all that easy.

Cece: Are you kidding? Dolly Parton by about a mile. They have both had plastic surgery, which is not a good look for anyone, but Dolly has better songs and, I think, a really good attitude. Maybe Cher has a good attitude, too, but that robot voice stuff in “Do You Believe in Life After Love” makes me queasy.

Mad: Burt Reynolds or Ted Danson? (Both toupee wearers. Not sure about the proud part.)

Cece: Burt Reynolds, but before his relationship with Loni (and with his plastic surgeon). I love him in Deliverance and the Smokey and the Bandit stuff.

Mad: And one last question: Knowing that SM can be more than a little vain at times, I was wondering what he thinks about all of this?

Cece: He is beyond furious.

Mad: That wraps us up. Thanks, Cece, for taking the time to answer my questions. I hope everyone else will tune in for the rest of Cece's blog tour. Locations and links follow.

Monday, Dec. 1, Sam Riddleburger's Blog
Tuesday, Dec. 2, That was me. You were here.
Wednesday, Dec. 3, Plastic Pumpkins. Over the top. You will thank yourself for checking it out.
Thursday, Dec. 4, Through Internet magic, Cece and Jerry Bee are in TWO PLACES AT ONCE
Seven Impossible Things Before Breakfast
and Bookstogether, where a crack panel of 4 to 8 year olds will ask Cece probing questions.
Friday, Dec. 5: 100 Scope Notes
Saturday, Dec. 6: Stop back at Cece's web site for chance to win something bee-wonderful!
Posted by mad at 9:35 PM