Having Fun with Stonewall Hinkleman 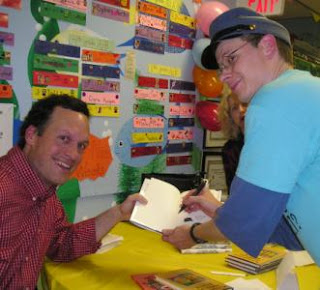 Welcome to Day Three of the Stonewall Hinkleman Blog Tour. I love spending the day with co-authors Sam Riddleburger and Michael Hemphill whether we're hanging out on the Roanoke River or here on this blog.

Sam, Michael and I worked together back when we were all in newspapers full time. (You remember newspapers, right? Black and white? Used to be read all over?) Before I left the New River Valley, the three of us had conversations like the one you get to eavesdrop on. Only then our conversations were about town politics and how to get sources to call us back and whether we wanted to eat lunch at Triangle Lanes (now a Walgreens) or Dude's Drive In (still there!)

Today we're talking about war -- the Civil War -- as it comes alive in their new book Stonewall Hinkleman and the Battle of Bull Run. Before we begin our conversation, I want to remind you that you are now eligible to win a FABULOUS PRIZE PACK featuring a signed copy of Stonewall. Details at the end of this post. 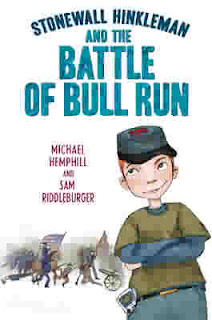 Me: In your story, Stonewall's parents drag him to war reenactments every weekend. What sorts of things did your parents drag you to when you were kids?

Sam: I sat through a lot of auctions and toured a lot of old houses where I wasn't allowed to touch anything. However, I enjoyed most of the Civil War places we visited, because my father had a lot of knowledge and enthusiasm for the subject -– in a good way.

Michael: My mom is this classical music lover, so we got dragged along to “cultural” events – symphony, ballet, etc. etc. Hated it then … appreciate it now.

Me: I'm one of those people who would, if I didn't already love you guys, be your toughest audience. I've never been a fan of Civil War history. I had a social studies teacher who was big into reenactments and wanted the South to rise again. I'm not sure that helped. Growing up in the South, it's so in-your face. Battlefield markers everywhere. Flags everywhere. Stickers on the backs of cars that say "Heritage, not hate." Could you guys talk a little about your feelings about the Civil War, before and after you finished this book? Did working on this book change your feelings about the war?

Sam: It's amazing how people assume that Stonewall Jackson was “bad” for fighting on the side of slavery, but gladly believe that George Washington and Thomas Jefferson were “good.” It's a messy, messy area and we don't try to solve it all -– just explore it.

Michael: Even though I'm from Alabama, I was never a fan of Civil War history until moving to Virginia in the 1990s. The history is certainly in your face here, but it's sad that some folks tend to appreciate only part of the history while others tend to scorn it all. It's THE defining moment of American history.

Me: When you set out working on this book, did you think: I want to write historical fiction? Or did the characters come out first?

Michael: I wanted to write historical fiction, but the story didn't come alive in any sense of the word until Sam dreamed up Stonewall … Hinkleman, that is.

Me: I was happy to meet him. I especially liked the meetings between Stonewall and Tom. Historical fiction was never my favorite genre, but having just read March (for adults, also about the Civil War; I'm planning to write Geraldine Brooks a very long fan letter), followed by Hattie Big Sky, and STONEWALL HINKLEMAN, I am quickly changing my mind. (If you guys have any favorites in that genre that you want to mention, this is the place.)

Michael: I have become a big fan of Alan Furst's historical novels about Europe during the rise of Hitler and World War II. I find I've learned more history in those books than anything I've read in a textbook.

Sam: As far as kidlit goes, I'm a big fan of the Great Brain series, Queenie Peavey and, of course, Little House.

Me: The Great Brain and Little House! How could I forget them??? (Tangent alert: Did you know a Little House musical will begin touring this fall, with Melissa Gilbert playing Caroline? Could be scary but if it comes anywhere near here, I'm going anyway. The complete tour is supposed to be announced soon.)

Me Again: Is it true Stonewall had more of a potty mouth in an earlier version?
Sam: It was mostly Cyrus, I think, who had to get cleaned up. Michael decided to give him some Shakespearean curses instead of the &*#@ and )%*#.

Michael: Given Sam's proclivity for toilet humor (think Qwikpick) I credit him for the potty mouth. But we wanted to make sure the book got read in classrooms, so the damns became durns.

Me: When Stonewall first came into your mind, did he have ADD? Or was there a more conscious effort to create a character who was dealing with that challenge?

Sam: I do believe in ADD, but I'm skeptical about Stonewall Hinkleman's ADD. I think he was happy to get the diagnosis and use it as an excuse for his bad attitude and sloppy homework. Now Cyrus … he clearly has ADD.

Me: Tell me a little about how you guys collaborated on this story… the process, I mean.

Sam: Write a chapter. Email it off. The other guy writes a chapter and emails back. Repeat until book is done.

Michael: With some editing by the other guy in between. Sam really set the tone of the book. My writing style at the start of this project was more formal … academic. But I quickly realized that Sam's voice was going to make the book, so I tried to mimic what he had established. At some point early on we created an outline that we roughly followed … at least for the first draft.

Michael: Rhetorical or with knives?

Sam: The best fight was in public at a library where we were doing some revisions on a laptop. Very heated. Since it was Michael's laptop, he threatened to change everything back when he got home.

Me: How do you think it would be different if just one of you wrote it?

If it were just Sam's version, for instance?

Sam: Wouldn't have made it.

If it were just Michael's version?

Michael: Would have been much better. (Ed. This is where my blog needs a laugh track.)

Me: I know Sam wrote a blog entry about how you improved on the time travel, hashing out the rules. Were there any other moments like that when either an editor or one or the other of you made a suggestion that set off a huge, manuscript-improving epiphany?

Sam: Michael wanted a female character in the book from early on. I kept saying no. I just couldn't see how she'd fit into the book. Much later – after we had sold the book to Dial – I finally saw the light. Now we have Ashby, who I think is a great character. She's got the bravery Stonewall lacks.

Michael: Sam's kind, but while I may have had some hazy notion of a female character in mind, Sam brought Ashby to light.

Me: Speaking of time travel: Could you talk about some of your time travel inspirations?

Sam: I have to say that Back to the Future was an inspiration and an Uninspiration. We worked very, very hard to make sure this book wasn't Back to The Future IV: The Civil War Years.

Me: Who do you hope to reach with this book?

Sam: The brotherhood of man.

Michael: And their sisters, too.


Me: What are your plans for escaping the toilet-bowl economy and convincing the world they need to buy this book? You may make your pitch now.

Michael: Well, we've got the 150th anniversary of the Civil War starting in 2011, and like I said earlier, I view the war as the pivotal event of American history. Everything before it (Revolutionary War, Declaration of Independence, Constitution, etc.) served as precursor, and everything since (including President Obama's election) has been a resolving of the war's aftermath. And yet it seems all that most kids know about it these days is that the North was “good” and the South was “bad.” I hope Stonewall inspires them to want to learn more.

Me: How much research went into this?

Michael: I knew a fair amount about the battle and have visited the Manassas (Bull Run) battlefield. I also co-own a Civil War battlefield tour company with friend and tour guide Robert Freis. He helped a lot with the background and research and historical personalities in the book.

Me: The end clearly leaves you wide open for Stonewall Hinkelman and the Battle of Antietam. Have you guys started work on such a thing?

Sam: What we've got in mind is a five-book series, with one book for each year of the war. One book will explain Tom. The final book would end at Appomattox, of course, and could feature Stonewall's dad and his re-enactor pals finally getting a chance to shine. We've also discussed the use of zombies.

(Me: It's working for Jane Austen.)

Michael: Or Stonewall ends up in 1955 playing “Johnny Be Good” with Michael J. Fox at the big high school dance.

Me: Oh: I want to give Michael a chance to talk a bit about his work with Civil War Journey.

Michael: We started the business in 2000 and offer customized Civil War battlefield tours to domestic and international clients. We also offer a schedule of weekend-long tours.

Me: Succinct. Factual. But this is supposed to be self PROMOTION. Try: Michael and Rob have put together a company that makes hearts thump! Clients say they vividly bring the Civil War to life! (Hey -- didn't I see something similar in a review of Stonewall?) You can visit them at civilwarjourney.com.

Me: Some final, scatter-shot questions for both of you:
Favorite battlefield?
Both: Antietam

Me: Favorite Civil War food
Sam: Goober peas
Michael: none of the above

Me: Favorite Civil War disease
Both: The vapors

Me: Favorite Civil War accessory
Both: The magic bugle, of course

Me: Thanks so much! And now, a little information about the prizes connected with the Stonewall blog tour:

One (1) lucky winner will receive a Stonewall Hinkleman Prize Pack containing a signed copy of Stonewall Hinkleman & The Battle of Bull Run, a t-shirt just like Stonewall wears on the cover AND advance copies of four other Dial Books for Young Readers titles! To enter, send an email to blogtour (at) stonewallhinkleman.com and put "Stonewall Contest" in the subject line! That's all you have to do to be eligible.

If you've read this far, here's a tiny, extra incentive for bloggers willing to help me with a little guerilla marketing. (See "toilet-bowl economy" above; every bit of publicity helps.) The prize is a stamp of this dog 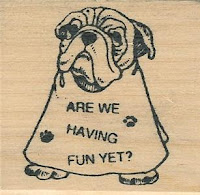 who shares a certain sentiment with Stonewall. To be eligible, just write "Stonewall slept here" and provide a link to blog hq from your own blog. Let me know either in comments or at madelynruth at hotmail (dot) com. I'll draw a name and send that person the stamp. But mostly I'll send the satisfaction of knowing you helped some really great folks.

Thanks to Sam and Michael, the authors. Thanks to you, the readers!

****
In case you missed them, you can go back in time and visit the other stops on Stonewall's blog tour -- no magic bugle necessary. (That's Internet time travel!!)

Thursday, May 7 - One True Believer

Friday, May 8 - Saints and Spinners