Things my 2-year-old wants:
Heelys
A swing
Crocs
Cookies
Fairy wings
For her friend Gabriella to live with us

Things my 5-year-old wants
A fiddle
Crocs
A boy-sized rocket that really works
A different ending for Stuart Little (the book, not the movie)
For his preschool friends to be in his kindergarten class
A playmobil cruiser
New Legos
A brother-in-law

My definition's certainly different now, but when I was a kid, I considered myself deprived because I never had the following:

Cowboy boots
Glow sticks
A prairie skirt (that's because I was short, I think, and not because my folks said "no." They did say "no" to the rest of this list.)
A hermit crab
Designer jeans
A cap gun
Posted by mad at 4:58 PM No comments:

That's Right (You're not from Texas)

There's supposed to be a buzz when you get back from the trip. Sometimes it lasts a day. Sometimes it lasts a week. If you're lucky, it can last even longer. We weren't so lucky when we got back from Texas. The Tech shooting happened the day after we came home, and that buzz wore off even before we'd fully digested the last migas taco from Maria's. Still, late as it is, I wanted to mention a few highlights from the trip.

1. The bats at the Congress Street Bridge: It wasn't like batman, with bats flying in every which way. These squeaky guys, part of the largest urban bat colony in the U.S., flew out in one long, steady stream, a ribbon of bats trailing into the night sky. They're more impressive when you stand underneath them and watch them fly overhead. The ribbon never seems to end. That's because there are as many as 1.5 million bats under that bridge at any given time. Just as impressive is the pr campaign conducted by one Mervin Tuttle, who convinced Austin that hosting all of these bats was a good thing.

2. Maria's Taco Xpress. Our pictures of Texas appear to be largely of food, giving me new insight into the split panel of ZZ Top's Tres Hombres album. We ate at Maria's three times and recommend the breakfast taco with chorizo and potatoes and the migas taco, along with the vinegar and cilantro salsa. 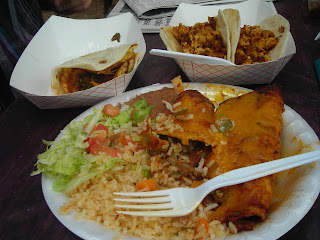 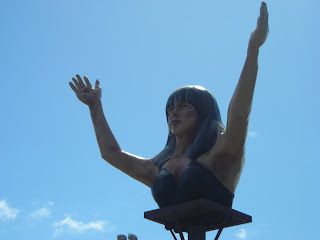 3. Grackles. Yikes. These guys are everywhere in Austin and they'll eat your migas taco if you leave it sitting on your plate for too long.

4. South Austin Jugband: They're getting a jam band reputation, apparently (Willie, the guitarist, has white-guy dreads) but they are amazing musicians and they're super-exciting to watch.

5. Miss Leslie and her Juke Boxers: Think Patsy Cline or Loretta Lynne. Low voice, with lots of huevos. We caught her at Miss Jenny's Little Bighorn.

6. The Broken Spoke. An old-school honky tonk that's extremely well known but not all that touristy. The back room shows pictures of the owner with Bob Wills, Willie Nelson, Dolly Parton and more. It's all about dancing here, with couples in matching cowboy outfits (some as old as 80) twirling around the floor. We saw fiddler Alvin Crow. Owner James White made the rounds in his cowboy hat and spangled shirt. He led these people to the table next to us and I was gawking a bit, ticked off that they were getting the royal treatment and we weren't. I fingered my Lone Star Beer and sulked, so I missed it when my husband muttered something through the side of his mouth. Two hours later I learned that he'd muttered "Willem Dafoe."

7. Linkletter fans, we had to take a short dazed and confused tour. Sadly, most of the stuff from Dazed is gone now, but we did visit a moontower (as in "party at the moontower" and Top Notch burger (though we ate at Huts). The moontowers were used to light the city ages ago, before the town fathers were ready to spring for street lights. 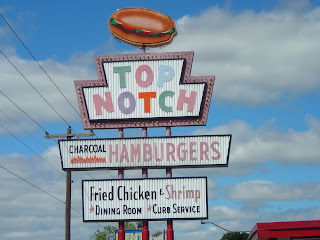 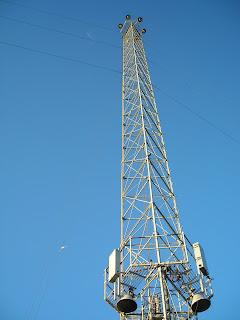 8. Speaking of western shirts, my husband bought an amazing one. Will try to put in a detail shot of that, too, in time.

9. The chain gang wasn't present here, at least in the downtown. We didn't see Starbucks, we saw Spiders and Joe's. Even the airport has mostly indy restaurants (Salt Lick BBQ and Amy's Ice Cream are local chains, not national ones.)

10. Polvo's restaurant: The best fish I've ever eaten. Name of fish to come when I consult my journal.

11. Ladybird Johnson Wildlife Center. Filled with bluebonnets and cactuses, it's a nice refuge not far from the city. Biggest revelation: LADYBIRD JOHNSON IS STILL ALIVE. She's 94. 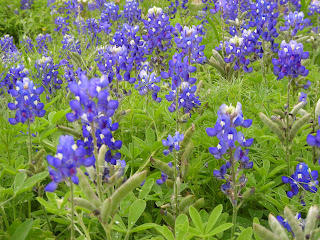 My son went on a field trip with his preschool class to Harris Teeter.
When I picked him up I asked him if he'd learned anything new.
"Harris Teeter sells five different kinds of peppers," he said. "And they have a very nice wine department."
Posted by mad at 7:23 AM No comments:

The above header should take you to a Washington Post article about threats and harassment against female bloggers. I'm not surprised. A friend of mine had a blog on parenting that she ditched because of weirdos. And I have to admit that a recent tour of the Internet made me think about ditching these posts, too, or at least limiting them to people I know and trust.

Towit: Last week, under the comments section on my Washington Post op ed, I found a few disturbing missives. The worst began something like: "If I saw you I would kick you in the crotch and remind you that you have 40 years of life left while these children are now rotting corpses... " It went on. My husband asked for its removal, due, in part, to the threatening nature and in part to the language. I understand that the subject of Blacksburg and death and victims is cause for anger and upset. Duh. I feel it, too. But why have we reached a point where anyone who doesn't agree with you exactly is suddenly the enemy? I got similar responses when I covered music. I was a c#&$ because of a few choice words about Puff Daddy. Ditto after I gave Aerosmith a great review but disparaged ever-so-slightly Steve Tyler's voice on "Dream On." But that wasn't quite as personal as what I felt last week.

To make me feel a little better, a little less shaky, my husband took me to other comment sections at the Post website. Almost every story had something pointed and nasty written after it, under the cloak of anonymity. No "I respectfully disagree." Just swears and threats and curses. Ditto on youtube after a video of Nikki Giovanni's speech from the recent Tech convocation.

Why are people so angry, me included?

Why did I get ticked off at the woman in the wildflower shop, just because she didn't know the states in which the Bluebonnet was considered a native plant?

Why did the Marine from Colorado hang up on my stepdad after calling him, blindly, to see if he agreed that cadets should pack guns on campus and serve as a backup police force. (My stepdad didn't agree, thus the hangup. But doesn't civility command a "goodbye, and thank you for your time?")

Why, when someone cuts you off or stays in the left lane too long, does that person suddenly become a (insert swearword here) as opposed to just some dude whose driving could stand a little improvement? (I'm sure I could find a way to relate all of this back to Don Imus, but for now let's just leave him out of it.)

I'm not sure of the answers, but I'm glad people are asking the questions. Meanwhile, my spring resolution is to try to mellow out. To be -- at the risk of sounding like a deadhead -- kind. I'm hoping more people will do the same.
Posted by mad at 6:21 PM No comments: