So sings Gloria Gaynor. So sings me!
I made it through my reading tonight without blowing into a paper bag (though it was touch and go there for a moment). I wore a skirt and am certain it was crooked when I was on stage. BUT I survived. They are very brave, those poetry people, putting it all out there night after night. I'd consider doing it again. Next time I'll wear pants.
Posted by mad at 9:46 PM No comments:

At the beginning of the year I made a resolution to do a public performance of some kind. I hadn't done anything in public since I was a bee in ballet class, unless you count marching band-- though who could see me under the hat? Anyway, I started by playing guitar at my daughter's preschool, just three chords while the kids sang. Mission accomplished.

Now I'm going public again, with a poetry reading on Monday at Busboys and Poets in Shirlington. Fortunately, I will be with the five other, more experienced poets who were part of this year's moving words competition for Arlington. Our poems will be published on buses here and in Fairfax County. We'll each read for 10 minutes or so, followed by an open mic night (which means if you go, you can bring a poem of your own).

Before this, I had threatened to be a part of an open mic night or even a poetry slam, which is something I'd always wanted to do in college, but didn't because a. I was chicken and b. I spent every waking minute at the school newspaper. I always had some regrets that I didn't do the artsy thing because I figured that was the only time in my life when doing the artsy thing would be an option. It was certainly the only time of my life I could've gotten away with wearing a beret.

I will not be wearing the beret on Monday, but I will be trying to tap into that creative side that has spent the last 20 years buried in newsprint.

I try not to go too heavy on the parenting advice, the underlying reason being that basically I'm just winging it. But I just thought I'd mention that, if you happen to have a 6-year-old boy and he happens to have a best friend, it is a very good idea to take the training wheels off of their bikes at the exact same time.
Posted by mad at 4:51 PM 1 comment:

So just this short note, to direct you to www.tvturnoff.org. And to recommend that if you happen to have young children, you should start TV Turnoff Week at the library. I did, and came away $44 poorer (see previous post about daughter's book-ripping incident). But I also came away with 20 books, including Charlie and The Great Glass Elevator.

Tomorrow, hit the hardware store and buy some seeds. Climb a tree. Write a poem.

Tomorrow night, consider listening to NPR for your election returns. Consider taking a valium to make it easier.
Posted by mad at 7:21 PM 2 comments:

The thing my husband and I argue about the most is time.
I don't have it.
Neither does he.
Mostly we argue about who has it the least or who needs it the most. So I totally understand when people say they don't have time to take a chance on something new. I'm guilty of that these days, too.

When we had more time, we used to complain about people like me. My husband was booking shows then, bands he loved and believed in, for some clubs back in Blacksburg, Va. Some of the bands were admittedly obscure. Some were local, just trying to get heard. Sometimes there was a good buzz and people showed up, but I can't tell you the number of shows I saw in which I was one of seven people in the audience. Still, the bands played on. On the way home (after a trip to the bank machine in which my husband had withdrawn his meagre savings to pay the band's $200 guarantee) my husband would rant: "Jesus, the shows are only $5! Why can't people take a chance for $5?"
"Maybe they only do that in Austin, Texas," I said. It was not a comfort.

Fast forward to today, when I went to a book reading by two friends. There was a decent enough crowd -- well over seven people. Still, I'd be willing to bet the authors knew everyone in the audience. Where were the new people? The reading was free. Plus, there were cookies.

In an effort to go somewhere with this spiel, to give myself a hook, I'll tie it loosely to TV Turnoff Week, which is approaching April 20th. But the time limit for this exercise extends far beyond next week.

What I'm asking is this: Promise yourself that this year, just once, you'll check out somebody new. For an hour. Drop in on a reading just because the writer sounds interesting in the paragraph you see in the paper. Go out and listen to a band, just because they're playing down the street at the Iota and the lead singer could channel Johnny Cash if Johnny Cash were a Japanese woman who played keyboard. Stop in a gallery because you see a splash of color that reminds you of the Virginia mountains during a winter sunset. I'll promise to do the same. And I'll also promise that even if the band sucks, if the writer reads in a monotone, if the artist makes you think of compost, your time won't be completely wasted. You'll get some karma points out of the deal, for one thing. And it might even inspire you to go write or paint or play (or read or look or listen more) yourself.
Posted by mad at 1:56 PM 3 comments:

Along with my obsession with church signs, I've also had an obsession with names of hair cutteries, specifically those that are built around bad puns.

My favorite has always been Hairport in Pembroke, Va. I almost declared a new winner after listening to today's Kojo Nnamde show, but the name of the shop turned out to be "Hair Rage" instead of "Hair Raid."

Others I've come across

My friend Laura sent in Curl Up and Dye, though she can't remember where she saw it. Southwest, Va.? An Internet scan shows one in L.A., one in Vegas, and another in Minneapolis. (Laura is slightly reminiscent of Mary Tyler Moore, but I don't think she's spent much time getting her hair done in Minnesota.)

One of the hardest things for me about parenting is finding the appropriate punishment when my kids do something wrong. Too often I go for No Television, even if the crime had nothing to do with television. Yesterday my 3-year-old pulled a doozy and did something that was completely out of character for her. She and a friend were in her room while everyone else was downstairs. After the friend left I went upstairs and found that they had shredded four library books. This hurt on a few of levels.

1. Books are sacred in our house
2. We're still on financial lockdown. One of the reasons we use the library so much is so that we always have lots of new books that are FREE, something I would never take for granted. Replacing these books is NOT going to be free.
3. One of the books was an Ezra Jack Keats book 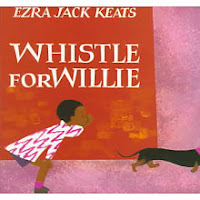 4. Her crime was a combination of mistreating books and being a blind follower, which we discussed but which is a hard thing to get across to a 3-year-old.

So what do you do as punishment? Parenting books are always saying the punishment needs to fit the crime. In that case, I should probably take away her books or refuse to read to her for a week so she can appreciate the value of a book. But taking away books is like taking away breathing. Plus, I don't want her to go a week without me reading to her. Which leads me right back to television, which is something I don't want her watching anyway. She also loses her bedtime book choices for a week. I told her I would read to her brother and that she could join us and listen, but that since he respected the books in our house this week, he gets to chose which books we read. She will also have to pay one dollar the next time she comes into money from someone (a grandparent, an aunt, etc.) to help pay us back. (This one is tricky; she doesn't get an allowance so we can't take that, and the next time she gets money from someone is likely to be August, which is pretty far removed from the actual crime.)

I also took her to the library last night and had her apologize to the librarians. I tried to point out that this wasn't part of the punishment; when you do something wrong, you apologize for it. End of story. I called the children's librarians first and I told them we were coming in advance.

I'm still not completely satisfied with the punishment. But I am satisfied that it's something she won't do again.
Posted by mad at 4:28 AM 4 comments: