It occurs to me, as my daughter asks me to find "the gray socks with the pink on the ends," that I am, among other things, laundry impaired.
Posted by mad at 7:06 AM No comments:

night at the smithsonian

They're filming the sequel to "Night at the Museum" in D.C. this week, and for some reason this makes me inexplicably happy. I never saw the first movie, but I'm always excited about seeing something filmed in a place where we spend so much of our time. (When we lived in Cambridge, Mass., my husband and I rented every movie about Harvard that we could find, including "How High," which didn't even attempt to make it look as if it were taking place in the Northeast.)

Anyway, we spent Sunday buzzing in and out of museums with our friends Tom and Cece and I passed a display at Natural History that could be a horror movie unto itself. This particular display has fascinated me ever since my kids and I first ran into it a couple of years ago during a mad race to the bathroom. My son stopped dead in his tracks, his bodily needs temporarily frozen.
"What's THAT?
"What are they DOING?
"What is WRONG WITH THAT MAN?"
The exhibit was a little dusty when we first saw it, and I seem to remember red lights, but maybe I made that part up. Anyway, I was glad to be able to share it with Tom and Cece, if not our children, whose eyes were covered. And I snapped a couple of pictures so I could share it with you. At the very least, this helped me grasp why the theory of evolution is a little scary for some people... 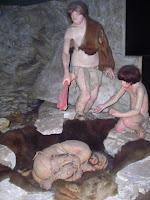 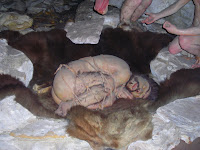 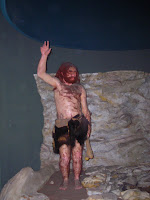 Car seat on a what?

Just returned from Florida without going to Disney World which is either an amazing triumph or rodent blasphemy, depending on your point of view. The highlight, other than seeing extended family at the bat mitzvah of the only 13 year old living in Boca Raton, was the Kennedy Space Center. My husband and I emerged, misty-eyed, from a number of the exhibits and films, all of which promoted the idea of a world without borders and people working together to reach the stars in something that looked like it shouldn't even make it to Palm Beach. The mantra: Nothing is impossible. It was hard to go out of there a pessimist, though the guy behind me on the last leg of the bus tour was working hard at it; I think he was disappointed because he kept missing the alligators when the guide pointed them out.

More on that trip later.

For now I wanted to take a second to mention another trip, written up in How to Fit a Car Seat on a Camel, an anthology of essays about traveling with children, edited by Sarah Franklin. My contribution is about my first trip to New York with (mobile) kid in tow. But there are many other essays by many other writers. I'm not so good at self-promotion, never having had to do it before. It will probably be easier if I promote THEM, so when I finish the book, look for a few notes on my favorites.
Posted by mad at 5:57 AM No comments: