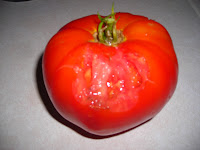 I'm blaming the chipmunks. My mother-in-law says it could be birds and a friend says it could be squirrels, but I saw the hole coming up in the middle of the tomatoes and, after I stopped that one up, in the cucumbers. The chipmunks have been attacking my garden. Small veggies disappear, leaving behind a stubby stem. Big veggies have big bites chomped in the side (see above).
I shouldn't complain. We've had a great haul this year, the best ever thanks to my husband's reading up on sheet composting. We managed to avoid store-bought lettuce for two solid months. We've eaten more turnips that I've had in my entire life combined. We've gotten sick of yellow squash. But we've lost most of the cukes and now the chipmunks are getting into the tomatoes, just when they turn red. Wartime.
I've been scanning the net for battle plans and so far I've tried two.
1. Juicy fruit gum. The net says that the chipmunks hate the smell and this will scare them off. My neighbor, Dan, says that this is an urban myth put out by the Juicy-Fruit People. Dan's probably right and my attempts haven't worked so far, but I still have some extra packs. When I see a hole, the gum is going in.
2. Cayenne pepper. I've plugged up three sprayers trying to get my own mix on the garden so I finally resorted to a red pepper spray, purchased at Ayers, the greatest hardware store in Northern, Va. It hasn't worked so far. This morning we went out and found more tomatoes bitten than ever before. My son thinks the chipmunks are angry and looking for revenge. I'm angry, too, but not so angry that I'm ready to try the third battle plan I found on the internet, the so-called Bucket of Death.
They're too cute to kill. I may be ready for some humane traps, though. I think they need a nice little vacation several miles away...
Posted by mad at 7:53 AM No comments:

A couple of years or so we saw an ad for a Muppets Exhibit at the Smithsonian. We went and found a glass case containing some of our favorite Muppets but ... nothing more. Sure, the Swedish Chef was there, and that counts for a lot. But we left disappointed. We were NOT disappointed this weekend, though, when we journeyed over to the International Gallery, nextdoor to the Smithsonian's Castle, to see "Jim Henson's Fantastic World." Storyboards, early sketches, posters, drawings, and video footage of some of Henson's early commercials, including those for Wilkins Coffee and for the La Choy Dragon, running in an endless loop. Hard to see everything with little kids in tow, but just reading the timeline at the beginning of the exhibit is enough to make you realize you're in the presence of genius ... if you hadn't already realized it before. (We had.) In this exhibit you'll find Kermit and Ernie and Bert, along with Rowlf and the puppets from Mahna Mahna. Swedish Chef is sadly absent, as are many others. ("WHERE'S FLOYD PEPPER?" my daughter demanded, very loudly. If anyone knows, please post...) He was there in spirit, if not plushy flesh. And I definitely spotted the pen drawing of Dr. Teeth. The exhibit also has apuppet theater for the kids, a make-a-face station, and a little counter where the squeakers can work on their own storyboards while you check out everything that's hanging on the walls. That probably would have been easier for us if we'd gone on a weekday; we went on a Sunday and it was packed. We're planning on going back for a closer second look. The exhibit is in D.C. until the beginning of October, when it goes South to Florida, Kentucky and Georgia. If it goes near you it's definitely worth a look.

For more information visit jimhensonlegacy.org
Posted by mad at 1:12 PM No comments: