So the rain this week hasn't let me do my very minor act of guerilla publicity, but I have tried to follow Darcy Pattison's lead and do the things she suggested on her site, which cannot be cancelled due to bad weather.

Day 1 was word of mouth day. Tell a friend about a book, Darcy said. I decided to tell my friend L about Sara Lewis Holmes' book Operation Yes. The book is about a class of military kids, always on the move with their families, and their very special teacher in Room 208. I'd mentioned it to L back before it was even called "Operation Yes." But I hadn't followed up because L and her kids had moved to Ohio with her military husband. I vowed to track her down, spent the morning looking for her email, didn't find it, and took my kids to their first day of school. And in the lobby I saw... L! She had just moved back to Virginia. So I told her about Sara's book in person. And later, when I got her new e-mail address, I sent her the link to Sara's website and blog.

Day 2 was Write a Review Day. The idea was to write for Amazon, Goodreads, Barnes and Noble, etc. I am normally not a fan of those reviews, in part because everyone seems to give reviews written by Joe and Jane Public the same weight they give reviews from magazines and blogs. Which goes back to my feelings about newspapers, and how people now feel like they can provide their own news better than reporters. Which goes back to my feelings about how people comment, rudely about newspaper articles, because they are allowed to be anonymous. Which goes back to my seething feelings about a certain representative from South Carolina, who feels he is entitled to make an already low bar for civility even lower by disrespecting both the president and his own office and chamber... Okay. I'm digressing seriously here. My original misgivings actually sort of underline the reason for writing a good review of a friend's book on a public site. So for that assignment I signed up for Barnes and Noble and now appear as MadgeVA. (Madge being a nickname given to me by my friend Tom Angleberger, aka Sam Riddleburger, who I hope one day will blog about how he picked his pen name. I reviewed my friend Moira's book, "Penny and the Punctuation Bee," which my kids adore. And, it goes without saying, so do I!

Day 3 is to link to a good book, to help it appear in searches and whatnot, and for this, I'm moving to an adult book, by my friend Jim Mathews. I wrote about this book in my holiday letter last year, but I haven't blogged about it. Now I'm here to tell you that this book is an amazing piece of war literature, given in bite-sized stories. It wraps tension and emotion with humor, the same way you might wrap a scallop with a piece of bacon. It's magical and real at the same time, and was the winner of the Katherine Anne Porter Prize in Short Fiction.

We'll see what day 4 has in store!

I also wanted to make a quick note about an e-mail I received today from the state of Virginia, saying that the state's artist fellowships, usually given to help artists (and writers!) do their thing, have been cancelled for the year, due to budget cuts. I'd hoped to apply, as I am still in need of a new furnace. Anyway, it's another reason for those of us who aren't completely strapped to go out and support our friends by buying some books.
Posted by mad at 6:33 PM No comments:

Back after a summer off from blogging and what better way to get back into it than by following Darcy Pattison's brilliant suggestion of performing Random Acts of Publicity. This is where you help friends who have written books (or even people you don't know but whose books you like) and find ways to promote them. Er, randomly. Darcy has a more official setup/plan of action, but as I've been plum out of it, I'm just going to be true to her idea and try various random acts this week. I'll likely focus on people whose books I haven't highlighted on these pages. Bits. Whatever.

School officially starts today, but I'm already thinking about break, so I want to start by welcoming a new book about Thanksgiving. My favorite way to welcome books, as you know, is with a little song.

The book is by Jacqueline Jules, the driving force behind my critique group. I've lost count of how many things she's published since I joined four years ago, but I'm pretty sure it's at least 10 (not counting poems). 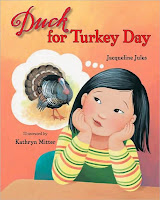 Duck for Turkey Day is Jackie's latest. It's about Tuyet, a young girl who's embarrassed to tell her classmates that her Vietnamese American family won't be eating turkey for Thanksgiving. But when she finally admits what she really ate (Hint/Spoiler: It's in the title) she finds that everyone's traditions are a little different. But they're a little bit the same, too.

You can't release a Thanksgiving book ON THANKSGIVING, of course. That would be bad marketing, especially when the stores have been hocking their Halloween Merch since, what, July? So it seems entirely reasonable this is a September release.

Anyway: To the music!

We'll start with Cousin Emmy playing Turkey in the Straw... on her cheeks.

Since Tuyet's family is from Vietnam (where I tried all kinds of crazy things when I visited in '95, but sadly, no duck) I thought I'd link to one of the most touristy things I did during my visit, which was to attend a performance of Hanoi's traditional Vietnamese Water Puppets. I didn't take any video when I was there, but this person did.

And what is Thanksgiving without Thank You by Led Zeppelin? Sadly I couldn't find any live footage on youtube, so there's just the music...

I'm sending you on a bit of a duck chase for this last one. The song's called "Ducks in the Pond" by the late Henry Reed, an old-time fiddler from Giles County, Va. I wanted to highlight Reed's work, too, so I figured I'd send you to this collection at the Library of Congress. Click on the link to "sound recordings" and then go under "D" for duck!

I've planned a minor guerilla action for another book for Tuesday. Stay tuned.
Posted by mad at 8:15 PM No comments: