Okay, these actually took more than 5 minutes to make, but they didn't take TOO long so I figured I'd share. Introducing the sock Moomins, as visualized by my own Moomin fans. 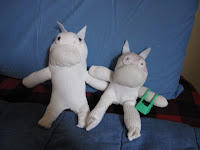 The inspiration:
These past few weeks, Washington's embassies have been host to the Kids Euro Festival. This is the second year they've held it. Last year we were too out of it to notice. This year we noticed late and by the time we did, we were too ensconced in soccer games to make it to most of the free (yes! free!) performances. BUT we made it to one, at the Finnish embassy, featuring "a musical landscape" inspired by Tove Jansson's Moomintroll Books. I loved these books as a kid, and when I read them to my kids last year, they loved them, too. There is something a little other worldly about them (duh: they're about MOOMINS), and magical, and sweet, and strange.

The Moomins look a little like hippos, except smaller. (Their ears are actually a little rounder than these, but my kids thought triangles would work best so that's what they cut out.) At the Finnish Embassy, the Moomins weren't small. They were mascot size. (Which sort of makes sense because in Finland, the Moomins seem to be as prevalent as Mickey Mouse. There's even a Moomin World.) In the U.S., the Moomins are ambassadors.

The event featured Snufkin, Moomintroll, Little My, and Sniff, dancing and singing. Snufkin, of course, was the host. He played a saw. And the whole performance was a little magical. And strange. It kind of reminded me of the first time I saw The Teletubbies (which means I did think once or twice: What were they smoking? But in a sweet, affectionate way.) The event was definitely geared for the preschool age, though the books are for older kids. Still, the other-worldliness of it made it tolerable for my guys, as did the freebies: Ginger cookies shaped like Moomintroll and Snufkin! Slap bracelets! Little pins in the shape of Moomintroll! The space was great, the architecture of the building was very cool, and what's not to love about a Finnish guy in a green hat playing a saw?

Went home from the event and immediately my kids wanted to make Moomins out of socks (while my husband wanted to book us on the next plane to Finland.) Buoyed by our recent success with Sock Hedwig, we put together our Sock Moomins fairly quickly, though I'm calling what we came up with a prototype because they can definitely be improved (i.e. next time we need to use NEW socks instead of socks that are a little brown at the heal! Next time we should go with black felt and white felt for the eyes instead of a magic marker.) But once again, we're all about immediate gratification here. An hour or so later we had two Moomins, which have been a hit, even if Moominmama did have to borrow Polly Pocket's purse.

Oh, and I just found a picture I loaded from last winter, when we made Moomins out of Sculpey. They're a bit battered here -- the ears being the most breakable. We built them a little house out of a yogurt container. And blueberry pancakes on plates. Hours of entertainment! 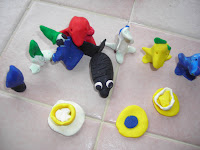 And we're definitely putting the festival on our calendar for next year. I was especially interested in some of the Romanian magic acts, but there were too many time conflicts. I think with better planning we can get more out of it.
Posted by mad at 7:29 PM

I wasn't able to see the picture of the sock Moomins yesterday but I can now and I love them! Your husband's plan sounds good, too.

i love them (too). the moomins are great and one day i WILL go to moomin world.

i just linked one of the best episodes on my blog: http://arentedroom.wordpress.com/